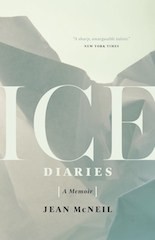 In March 2016 I will publish Ice Diaries - an Antarctic memoir. It's a book about ice and its properties, both emotional and physical - a tale of ice and the polar regions and a travelogue filtered through a personal climate change story. Here is a short extract from the book's introduction. The book is published in Canada and the United States by the fantastic ECW Press.

It was Simon, the base commander that summer at Base R, who first told me about it. A strange little book was tucked away in the base library, he said, a list of all the different forms of ice, written for mariners, in the tradition of the identification manuals carried on ships: those glossaries of knots, or wind, or seafaring terms.

I’d encountered ice terms on the ship, a lollipop red-and-white polar research vessel which had conveyed us to the end of the world: I knew about frost flowers, polynyas, growlers — all words for the kinds of ice you encounter at sea, and had taken an instant shine to these gnarled, revelatory terms. How many more kinds of ice could there be?

After some rummaging in the dustless library (no mites means no dust — the Antarctic is heaven for neat freaks), I found the book. It was a thin paperback with stiff blue paper covers, worn but not “foxed,” as they say in the book trade — those singed edges and brown liver spots which accumulate around the edges of papers and bindings — because there was no moisture in the air to fox them.

A Glossary of Ice Terms. The text was typed out in the blocky Courier of old typewriters. Ablation, black ice, candle ice, first- year ice, frazil ice, glass ice, growler, hummock, ice gruel, pressure ice, rotten ice, sastrugi, serac, stamukha, tarn, winter ice. The glossary listed over sixty ice words, in English. (There was a separate annex for Greenlandic terms.) There would be more to learn about ice than I had thought.

I signed the book out of the library using the outmoded index card system — a certain John Struthers’s name, with the date 1978 and a book named God’s Mammoth Tasks still shone in bright blue ink on the register, as if it had been signed only that morning. The slim ice glossary sat on my desk in the two offices I was assigned, Lab 7 and Lab 5, during the months I was in the Antarctic; by the time I left I had memorized the contents as you would conjugate verbs, committing to memory a language I never expected would be mine.

Ice has a life cycle, just as we do. We talk of it being born when an iceberg calves from a glacier, of its living and its dying when it melts. But actually ice is immortal; it never quite dies but is reincarnated, through melt, into water, into vapour. The Antarctic is by far the largest accumulation of ice on the earth. The Ice, as the continent is sometimes referred to — a term of affection — is, along with Greenland, the most complete frozen archive of our planet’s past. It is also an oracle, however reluctant or accidental. Through the chemical residues it traps, ice provides a precise record of the atmospheric past, and in particular how the planet has responded to past episodes of warming and cooling. Through analyzing this data, scientists become augurers: they can offer a likely scenario of how climate cycles and gaseous emissions will affect the future temperature of the planet.

Ice has also long been associated with another kind of divination: crystallomancy. The crystal itself has been used for future-telling through what in the eighteenth and nineteenth centuries was called scrying — looking into an object to divine a likely outcome. If we peered into it, mystics of the era believed, ice would reveal our future. Whether molecular or esoteric, ice promises revelation.

In the last ice age, the great ice sheets of the northern hemisphere were called the Laurentide, Fennoscandian, and Greenlandic and, in the southern hemisphere, the West and East Antarctic sheets. Of these, only Greenland and the Antarctic still exist. We remain in an ice age, but in a phase called an interglacial, when the ice sheets do not advance. This is an important point: shrinkage is not the key to an interglacial, rather lack of expansion is. So it has been for much of the planet’s history. The next ice age was expected to begin sometime in the next ten thousand years, due to naturally occurring cyclotherms — subtle alterations in the Earth’s temperature.

But now for the first time in the planet’s long history, this natural cycle has been disrupted by man, and it is possible the polar ice sheets which wait so patiently for expansion may never again begin their advance. The Antarctic Peninsula, where I was based for several months, is an apt place to contemplate this interruption; the peninsula is the fastest-warming landmass in the world; at 2.5 degrees Celsius each year, it is heating up at approximately six times the global average rate.

The realm of ice is a mysterious world, underpinned by several persistent and little-publicized scientific mysteries, even conundrums. Before I went to Antarctica I knew little of the cryosphere, that sphere not of tears but of ice, apart from having grown up in a cold, still-glacial landscape. People from my background — North American welfare class — do not generally go to the Antarctic, or at least not the British Antarctic, and certainly not as writers. I had never dreamed of going there. The majority of people who go to Antarctica are scientists who work in the cryospheric disciplines: glaciology, oceanography, marine biology, terrestrial biology, atmospheric chemistry, physics, and astronomy, along with the engineers, technicians, mountaineers, pilots, and mariners who support the science programme on the frozen continent and who are the modern-day equivalent of polar explorers, carrying their cold studs of knowledge of the fickleness of ice, the harshness of the light, the topsy-turvy world which awaits there, where all your expectations and beliefs of how the planet ought to behave are overturned as the sun performs strange revolutions in the sky.

In the years I have spent teetering between the tips of the world since my first trip to the Antarctic, years spent in spells in Greenland, Svalbard, Iceland, Norway, the Falkland Islands, or shuttling between them on ocean-going research ships, everyone — scientists, seamen, pilots, electricians alike — has spoken of Antarctica’s unique cultish allure. “Once you’ve lived there for any period of time, you can’t get the place out of your head,” Tim, an eloquent English builder I met on base, told me. The Antarctic has been described by the Australian writer Thomas Keneally as not so much a physical place as “another state of being.” The white tractor beam it exerts upon the consciousness of people who have been there, pulling them back, operates on a power beyond its obvious allures — its cold charisma, its pristine wildness. Could the lump of rock and ice that ballasts our planet at the bottom have qualities nowhere else on earth possesses? Could it be something akin to a consciousness? There, I felt the press of an external consciousness on mine, and not for the first time; as it turns out I had felt it as a child growing up in a cold corner of Canada’s eastern seaboard, but had forgotten it.